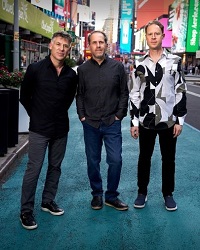 × In the mid 1990s, The New York Times described Larry Goldings, Peter Bernstein, and Bill Stewart as "the best organ trio of the last decade." The trio, which has now been together for over 30 years, has been recognized for charting new ground, with its synergistic playing, and thoughtful music. They have over a dozen recordings, all of which display their distinctive sound, whether exploring the depths of jazz standards, or playing their own original compositions.

Presented by Cellar Jazz and the Shadbolt Centre