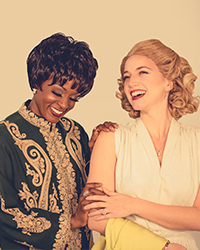 From the creators of the hit off-Broadway show JOSEPHINE, this new Musical explores the extraordinary mostly untold story of the friendship between two of the most remarkable women of the 20th Century: legendary singer/dancer/activist/spy Josephine Baker and Academy Award Winner and European Princess, Grace Kelly/Princess Grace of Monaco.

Winner of the Critic's Choice Award for Best Play, Musical at the 2021 Orlando International Fringe Festival, JOSIE & GRACE, and the challenges placed upon them and their relationship by powerful men who wanted their voices controlled or silenced.

Josephine Baker is back on the road, and this time she’s brought a friend