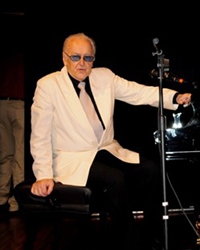 There'll Never Be Another You

× There’ll Never Be Another You

Born on March 1, 1932 in Znin, Poland, Ryszard Wrzaskała (1932-2018) was a widely recognized and loved composer, arranger, symphonic conductor and teacher. “His heart – and creative soul – is in composing. ...Wrzaskała has written more than 200 songs in English and Polish, most of them arranged as instrumental pieces... He also received more than 30 distinctions and honorary mentions over the world, including two gold medals in the Netherlands’ Expo 2000 Song Festival for the Best Song and Best Arrangement of his song “Zelazowa Wola” and another gold in 2002 for the Best Canadian Song “Lonely Man” at the same festival” (Melanie Minty, Now Newspaper). His song “Beautiful and Free” was featured as one of the 15 official songs for Canada’s 150th Anniversary.

Wrzaskała’s compositions range from classical to ragtime, pop, soul, jazz and blues. His many songs are known for their charming character and include lyrics in both English and Polish.

No refunds on tickets

$2.00 fee per ticket for exchanges